You Have A Choice…..

You Have A Choice…..

“You have a choice as to what reality you will experience, for there is more than one door in consciousness.” ~~John Randolph Price 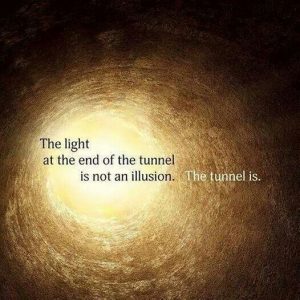 I grew up in the 50’s and 60’s. Looking back it seemed like a simpler time. I lived on a street that was all white people of different ethnic backgrounds. Each house was a little box and they all looked the same. The elementary school was right around the corner and we walked to school each day. The same crossing guard was there for 20 years. There were many children on our block and most of us played together. It seemed great. Then, my father left my mother and the dreaded label of ‘divorce’ came to my home. I was not viewed the same after that. The other things that happened in that simple little house, no one knew.  They didn’t know how devastated my mother was, or how she wanted to take her life, and how my sister and I begged her not to leave us. No one came to visit, no one offered support or help while my mother, who had never been on her own, was floundering. The whole ‘happy family’ scenario was so fragile, not just for us, but for many. To acknowledge us would mean they would have to acknowledge their own unhappiness.  Looking back, there was so much dysfunction in those little white houses, but most of the stories were never told. Emotions and issues were kept buried, it’s how things were done, we were told to be silent.  The children of the baby boomer generation did just that, as we were told, we buried our pain and insecurities deep within our ever messed up ego, we were programmed, and we became programmed adults.
I was the happiest girl in the world when I finally was able to leave for college. I believed I could do and be anything…..well, almost anything…..except that thing I really wanted to do and be. I was already told that was not possible. But I was enthusiastic about life, even though I was barely 18 and already told to settle……I just kept on going!!
Me and Bob Segar, “Like A Rock!”…..yeah…..
Stood there boldly
Sweatin’ in the sun
Felt like a million
Felt like number one
The height of summer
I’d never felt that strong
Like a rock!
Maybe some of you in blogland can relate. That amazing feeling of being able to make your own decisions and be in charge of your life. What I wasn’t prepared for was that the secrets of my childhood were so subtlety in charge of the decisions I was making. It wasn’t the real me, the adult me, the person ready for anything. I thought I had left all the ego shit behind, the fear, anger, the low self-esteem. I didn’t know, however, that was not possible. My mother and father taught me well. I took on their dysfunction and carried it like my own, till it became my own.
How to survive enlightenment??? That would make a good book…… The interesting thing, like in books and movies, enlightenment is a real thing. It comes in a variety of forms but it’s all centered around you looking within. You must let go of what you ‘think’ you know, which means all that stuff you were taught as a child. The school and  church propaganda, that’s gotta be put aside…..You really must let your personal opinion of yourself go also. As I say in my book, 8 Keys, “You will want to take what you think you know, or what you think you believe and put it aside for now. Pay particular attention to anything you read or hear that makes you angry or upset, or any part you want to skip because it makes you uncomfortable, that’s the most important stuff……Whatever has pushed your buttons is exactly the issue you need to work on!!!” 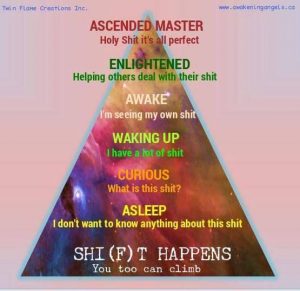 If it were only that easy.You could just step outside of your ego and put aside all that ‘shit’, but that’s the hardest thing a human will ever do. So you play out your angry, fearful, blaming others, emotions, as the same issues in your life keep popping up and get more dramatic. Scenario after scenario which feels like you are replaying the movie “Groundhog Day’ over and over again. Actually you are, the Universe is trying to wake you up. It’s actually your angels responding to you over and over by putting in front of your face what you need to deal with. Because most of you won’t put aside what you think you know and believe, ego won’t let you. So you are miserable and in your misery you want relief from the pain, either physical or emotional. What a mess,and it’s all because you want to be happy. The funny thing about happiness, it’s not connected to hate, blame, how much money you have, who you’re in love with, and all the other things humans try to be ‘happy’.  Happiness is found within yourself when you accept that you are not perfect……….when you know you tried your best………when you quit blaming others and realize only you have the power to change your life.
GOOD NEWS! The world around you, which you have created, whether you choose to take responsibility or not, can be changed. The Universe always says,’YES’ when a human says they are ready to change. That’s when you must deal with your emotional baggage. That’s when you must go within and see if the beliefs you have been holding onto for dear life, are actually worth all that effort. So let me lay it out for you, you are not perfect……yes, you are neurotic,…..yes, you take things too seriously……….yes, you do not laugh enough……yes, you’re adulting way to hard, and you need to take a break. See, that’s not too bad……
Years ago, before most of you were born, there was a beautiful young woman. And as these stories always do, she met a very handsome man. Maybe she thought she was in love with him. But things got out of hand and the beautiful woman became pregnant. The handsome man vowed to do the right thing and they were married. The beautiful woman didn’t plan on this and was very unhappy. When the child, a beautiful girl, was born, the woman resented her life and the child even more. She could barely love the child, for it was the child she blamed for ruining her life. A few years later the woman bore a son, the apple of her eye, she lavished him with love and attention, while the daughter was still resented………
A fairy tale, not so much, it lacks, among other things, the happy ending. You see, my mother was the baby shamefully conceived out of wedlock. My mother spent her life trying to get her mother to love her. While at the same time sexually abused by her father ……which her mother resented……..geez…….I remember the day my mother cried and confessed to me the bits and pieces of this story. How she never felt good enough, how she was never loved by her mother. My mother died taking care of her sickly mother, my grandmother, who by the way, was a bitch. There are so many ways this story could have had a happy ending or been different. Instead of my grandmother blaming my mom for her lot in life, she should have forgiven herself. My grandmother could have taken responsibility for her decisions………but instead her ego just blamed others…..
You humans sure play victim well……..
Maybe you know someone like that, maybe it’s you. Maybe it’s time to let go of ego and just forgive yourself for being human…….or maybe forgive someone else….. 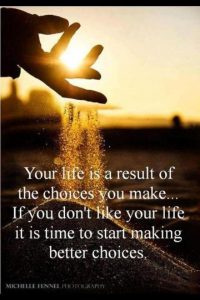 I miss my mom….sometimes when I look in the mirror, I see her face….and I know she is smiling because unlike my dysfunctional family, I chose to not go down the path of unhappiness, I chose to not make decisions from ego, I chose to have a voice and follow my heart. That I learned from my mother…….
I choose to be happy………..after all, it’s what I deserve, I am a Goddess!
And the Goddess always lives happily ever after….with her handsome God, of course!!